A Rockwell address in Pampanga: another reason to head North 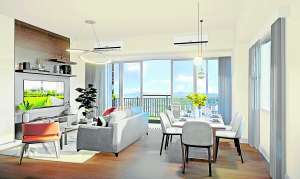 All roads seem to lead north nowadays, and it’s fairly easy to see why.

Just two hours north of Metro Manila is one burgeoning investment destination, touted as a vital gateway and an emerging growth corridor rife with promising opportunities.

The province of Pampanga is indeed rising as a new economic center, as evident in the influx of local and foreign investors, drawn to its conducive business climate and availability of raw land and skilled talents.

Over the last several years, Pampanga became an even more attractive hub owing to the aggressive infrastructure development near and within Central Luzon—some P180 billion worth of key projects aimed at further improving the competitiveness, connectivity and accessibility of provinces within this region.

Clark International Airport’s iconic new terminal alone, for example, has spurred new developments, raised property values, and birthed new businesses amid the expected surge in passengers going through this gateway. Projects like the Manila-Clark Passenger Railway, Subic-Clark Railway Project, Skyway Stage 3, and the NLEx-SLEx Connector Road are seen to create value and stimulate an investment boom that would generate fresh job opportunities and further elevate the quality of life in the region. Add to that the 9,450-ha New Clark City, a smart, resilient and future-proof metropolis seen to contribute a gross output of P1.57 trillion a year to the economy. Diverse offeringsUnsurprisingly, some have started coming to Pampanga to relocate—finding appeal not only in its progressiveness, but also in its healthy mix of the modern and the idyllic. The rich diversity of activities and offerings here present a holistic lifestyle befitting those looking for that ideal middle ground between the hustle of a city and rusticity of the countryside.

Given the locals’ purchasing power and this influx of migrants coming from other parts of the country, some property developers have started looking at their prospects here.

Joey Roi Bondoc, associate director for research at Colliers Philippines, said in his column for Inquirer Property that there has been a more pronounced launch of new township developments in Pampanga over the last decade. He also noted a growing appetite for vertical developments here as evident in the rising condominium stock in Pampanga which reached 4,089 units as of end 2021, up 49 percent compared to the previous year. From 2022 to 2026, Bondoc said they expect the delivery of 150 new units a year.

National players, he added, are capturing Pampanga’s potential by developing more integrated communities, an example of which is the Rockwell Center Nepo, Angeles.

Rockwell in the north This promising 4.5-ha mixed-use development marks Rockwell Land’s first foray in Central Luzon, where it brings its wealth of expertise in creating resilient, self-sustaining communities. It partnered with the Nepomuceno family, who contributed land, funding and business expertise for this upcoming masterpiece in the north.

Rockwell Land chose Pampanga as it sees the province as the country’s next frontier for economic growth and suburban living. Rockwell Center Nepo, Angeles—with its upscale residences, offices, and the first Power Plant Mall outside Makati City—will thus fittingly complement not only the significant contributions of the Nepomuceno family in the commerce, education, electricity and water supply sectors of Angeles City, but also the expected growth of the province.

Here, the purveyor of exceptional lifestyles is set to offer a distinctive community that does not only bear Rockwell’s signature touch, but also celebrates Pampanga’s rich heritage.

In fact, the first mid-rise residential building it launched here pays homage to Pampanga’s own Vicente Manansala, a Philippine National Artist renowned for his cubic style of drawings and paintings. It also aptly reflects Rockwell’s proclivity to the arts and fine living.

The Manansala at Rockwell Center Nepo, Angeles presents well-appointed spaces, offering refined comfort, elegance and exclusivity to suit the Kapampangans’ discerning tastes. This premier 15-story residence has a total of 206 units, which come in one- to three-bedroom cuts, whose sizes range from 45 sqm to 128 sqm. This translates to having only 14 units per typical floor, ensuring privacy and exclusivity.

Each unit comes with a 3-meter ceiling height, an open kitchen layout, as well as premium grade finishes. Glass sliding doors leading out to a balcony extends the unit’s spaciousness and treats residents to expansive, picturesque views of the Zambales Mountain Range, Mt. Arayat, and even the Clark Freeport Area.

Within this enclave, too, are some luxurious niceties—world-class amenities that will make The Manansala at Rockwell Center Nepo, Angeles a prestigious address in the north, especially upon its completion in 2025.

The showpiece is the Great Lawn, an expanse that adds to the open spaces that make up 78 percent of the property, and which offers access to a peaceful, laidback environment. Offering a myriad of activities are the fitness gym, multipurpose court, yoga and quiet garden, play area, barbecue area, as well as the family and kiddie pools.

What further gives The Manansala its Rockwell trademark is its impeccable security features that include 100 percent back-up power; an experienced Property Management Team ensuring exceptional aftersales services; and a dedicated Residential Leasing Team for those looking to invest in units for rent. Another exciting perk is that The Manansala will also have exclusive basement access to the Power Plant Mall Angeles upon its completion.

Like The Manansala at Rockwell Center Nepo, Angeles, a new residential tower in the development will soon beckon to the affluent few wanting a sophisticated lifestyle—all within a promising community poised to thrive gracefully in progressive, potential-rich Pampanga.