Your journey to green, sustainable living begins at Liora 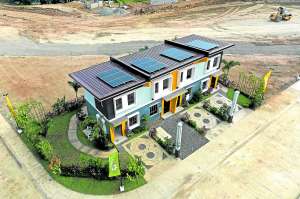 CitiHomes Builder and Development Inc. (MyCitiHomes) is reshaping the idea of affordable housing, proving that quality and sustainability can also be well integrated in these communities.Its latest project, Liora Homes Naic in Cavite, makes for a truly exceptional case as it shows the developer’s mindful, well-meaning choice to embrace sustainability—so much so that this groundbreaking project, which will see the inclusion of green features and amenities often seen in upscale developments, has landed the company in the Philippine Green Building Council’s pioneering BERDE Districts Program.

“The technologies and sustainability features in Liora Homes Naic are not new. A fellow developer, Imperial Homes, introduced solar panels in its projects well before COVID-19. Another developer had also introduced rainwater harvest tanks in its project, according to Weida Philippines, our rainwater tank supplier, albeit this was mandated by the local government where their project was located,” explained MyCitiHomes executive vice president John Philip Wang.

“The difference in Liora Homes Naic is that these major accessories, along with our other features, are integrated into the housing package we are offering. They are not optional upgrades,” Wang told the Inquirer.

Liora Homes Naic is a P3.16 billion development that will offer a total of 3,345 housing units—each a 44-sqm townhouse on a 50-sqm lot that comes with provisions for two bedrooms, one toilet and bath and a carport.

Several points demonstrate why Liora Homes Naic, stands outs remarkably in its segment. These significant features and numbers, as laid down by Wang, present a compelling case.

Liora Homes Naic, for one, will be a 5.48-megawatt residential rooftop solar farm, that will not only generate savings for homeowners, but will also reduce the community’s carbon footprint.

Rainwater harvest tanks will also be installed and will be able to capture up to 2.34 million liters of rainwater, which can be used for watering your gardens or flushing your toilets. Apart from ensuring water efficiency and conservation, these tanks are also a form of flood mitigation.

“Liora Homes’ solar panel installations will make it the biggest residential rooftop solar farm not just in Cavite or the Philippines, but in Southeast Asia to date. Its rainwater harvesting capacity makes it the biggest non-government rainwater catchment facility in the country,” Wang said.

Liora Homes Naic will install leak-free septic tanks with four chambers, not the standard three, for each unit. The houses will also use Conwood stair treads instead of raw lumber, enabling MyCitiHomes to prevent 1,345 trees from being cut down, which can in turn produce 350,000 pounds of oxygen or 7,000 50-lb oxygen tanks per year.

Natural lighting and ventilation are ensured as Liora’s Amora model comes with above-average interior heights from floor to ceiling and large operable windows. Its casement windows are complemented with awning windows, which can stay open even during rainy days. The inclusion of astrofoil insulation will reduce ambient heat.

Towards the right direction

While much remains to be done, MyCitiHomes believes its latest project is a critical step in the right direction. Wang noted that while net-zero carbon emissions is a supremely difficult target to achieve for horizontal developers, they should still adopt any and all technologies and advancements available to head in that specific direction.

“It is our hope that with Liora Homes Naic, and our participation in the Philippine Green Building Council’s development of its BERDE Districts program, we might be an example to other developers that it is possible to incorporate ecologically-conscious and environmentally sustaining features, while still being able to make a decent living as a developer,” he said.

“This is Citihomes’ tribute to the great province of Cavite, wherein we have established our roots as a developer, and we hope that it will bring pride not only to all residents at Liora, but also to Cavite, our industry, and country upon its completion,” Wang concluded.