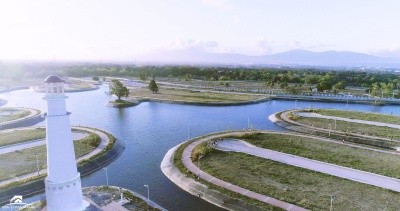 The incoming administration’s Build, Build, Build initiative has seen the rollout and completion of key infrastructure projects including new highways, airports and railways. Besides ensuring improved connectivity and accessibility, these infrastructure projects have also been helping raise the livability quotient in many areas across the country, spur economic growth locally, and improve the attractiveness of these locations as investment destinations.

But even before these infrastructure projects came into fruition, Sta. Lucia Land has already placed its confidence in many of these locations, thus enabling this property giant to leverage on these emerging growth routes, even those in the outskirts. Its parent firm, the Sta. Lucia Group, already has an extensive portfolio of world-class residential developments not only in the urban centers but also in the so-called fringe areas in the provinces and Metro Manila.

Experts in making good locationsLocation often defines a desirable residential neighborhood. The accessibility of a residential development to the city center or its proximity to transportation linkages is usually expected to improve convenience and encourage civic engagement.

Community involvement is one of the most significant considerations for homebuyers. Well-planned residential subdivisions or integrated mixed-use communities may appeal to families who want a sense of belonging and who intend to contribute to their local environment.

Developers such as Sta. Lucia Land, which has been at the forefront of helping enhance communities alongside the government’s infrastructure initiatives, fully comprehends the current reality and is always looking for methods to stay attuned with the market’s dynamic, ever changing needs. The company continues to enhance and fine tune its strategies to further expand its reach and catalyze growth in the countryside.

Expanding in the outskirtsWith residential, commercial, recreational and retail venues for its projects, the developer has also been expanding well beyond city centers in Metro Manila, even as far south as Davao and as far north as Benguet. Its residential estates are spread across growing provinces—from Laguna, Benguet, Pangasinan, Batangas, Bulacan, Cavite to Palawan, Cebu, Iloilo and Davao, among others.

Sta. Lucia Land relies on exceptional strategy, vision and leadership to stimulate growth and make aspirations a reality. Its developments north of Manila now give distinct experiences to both residents and tourists, demonstrating the company’s commitment in providing excellent and affordable alternatives for every Filipino.

When it comes to stability, size mattersIt is not just the current facilities that count, but also the future amenities. Plans for other schools, hospitals, public transit and other municipal infrastructure can also significantly increase the property values of any area. Any intended new public, commercial or residential projects, as well as additions to the existing development concept, can surely boost the appeal of the surrounding regions.

The Sta. Lucia Group has more than 250 developments that include golf courses, country clubhouses, lakeside and farm communities, and one grand mall, making it one of the biggest real estate businesses in the Philippines, in terms of total lot area, today.

Staying a step aheadThe Philippine government has earmarked substantial capital expenditures over the next few years to develop and link regions around the capital, to support the development of neighboring areas.

Sta. Lucia, which continues to beef up its landbank near the proposed government-led infrastructure projects, is well-poised to capture the benefits of such projects as it further expands its continually growing development portfolio.

Real estate firms in the Philippines see solid sales because of the country’s robust economy and stable political atmosphere. The corporation is more determined than ever to create an even stronger portfolio of residential, commercial, condominium, and recreational assets in future growth locations by always being a step ahead.

The author is the principal architect at Fulgar Architects, pioneering unique and metamodern design specialties for various real estate projects from hospitality, condominiums, museums, and commercial to mixed-use township developments in the Philippines. He collaborates with multiple industry specialists to develop joint venture opportunities for landowners and investors. Please visit www.ianfulgar.com