Workers have mixed feelings about returning to office 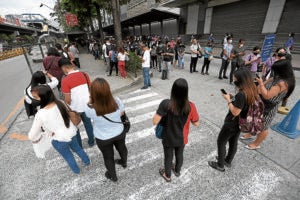 The countdown to the end of quarantine has begun. Some businesses and public transportation will resume operations, and people will troop back to work.

While such news would have cranked up everyone's excitement meter after more than a month of living in self-isolation, some people are apprehensive about returning to normalcy so soon.

"I'm scared. With a lack of testing and hospital capacity, I expect another spike in cases as early as June or July," said JLM, a businessman in Metro Manila. "Yes, I'd like to go back to work, but preferably only when things have been proven to be safe. Between money and life, I choose life any day."

JLM said that after the enhanced community quarantine (ECQ) was extended, when some food and beverage outlets reopened for delivery and takeout, the definition of "essential goods" reached a new level of shallowness. There were long lines of delivery riders at milk tea shops. A long queue of cars caused traffic buildup at a drive-through of a coffee chain.

"People are getting impatient, but life should be valued more . . . We should be eating to survive, not to satisfy cravings," he said. "For those who can afford, why spend money on restaurant food when we can instead give that to the poor and have everyone stay home? You see all these Viber groups with expensive food, what the heck!"

Liberty A. Pinili, who works for an energy company in Cebu City, also has mixed feelings about physically going back to work.

"Because I am not sure how safe it would be. Sometimes I get the impression that some government officials are in a hurry to lift ECQ so that the economy would recover.

And that makes me wary," she said.

Pinili added she is most worried about being "in an environment where there is an asymptomatic person sharing the elevator as well as common spaces at work."

No doubt the extra hours gained during ECQ have spiked Pinili's productivity, since driving to work and back home used to take up several hours of her day. She now has time to exercise and attend online classes. Having no one to have coffee breaks with also allowed her to spend more time on work.

But, she said, Cebu City is not ready for ECQ to be lifted.

"Some communities are being defiant," she said. "The new epicenter of the disease in Cebu City, for example, even posted a video in which they're dancing on the street---no masks, no physical distancing. Unless this behavior changes, we won't be able to manage this pandemic effectively."

Andrea Trinidad, a communications expert and consultant at Asian Development Bank, however, feels differently. She has her reservations about going back to work, but she's more pragmatic than most.

"Am I healthy enough not to be afflicted with the virus? Will I be unnecessarily exposing my family to the virus once I start going out? My kids are highly vulnerable because they have preexisting conditions. However, the reality is that I need to work for my family," Trinidad said.

Trinidad thinks it's time for the ECQ to be lifted, even if only partially. The government, she said, should put in place a mechanism to ensure public safety while allowing businesses and essential services to restart operations.

"I support the partial lifting by May 16. For people like us who run small businesses and do not receive 15/30 salaries, we depend on projects. I can't imagine how people are holding up," she said. INQ