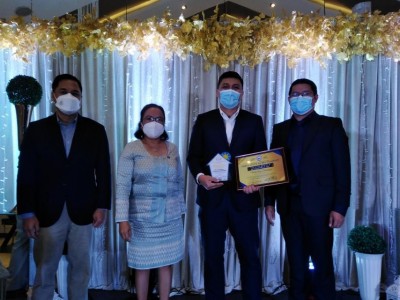 Sta. Lucia Group, one of the country’s leading property companies, has added another feather in its cap as it was named “Outstanding Developer” at the Gawad Parangal Awards of the Department of Human Settlements and Urban Developments (DHSUD) Region 4A held in December 2021. 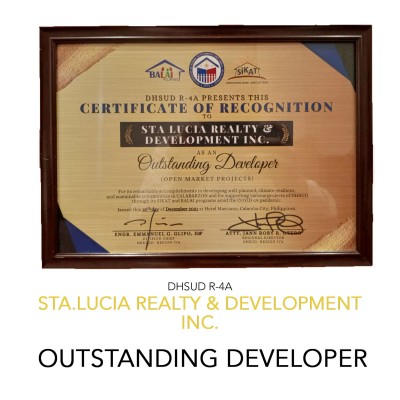 The regional office of the DHSUD in CALABARZON named the Sta. Lucia Group as an “Outstanding Developer”.

The Sta. Lucia Group also received the “Gawad Husay sa Pagpapaunlad ng Real Estate” Award in recognition of its valuable contributions to the real estate sector in CALABARZON (Cavite-Laguna-Batangas-Rizal-Quezon), including its continued efforts to develop quality projects in this region. 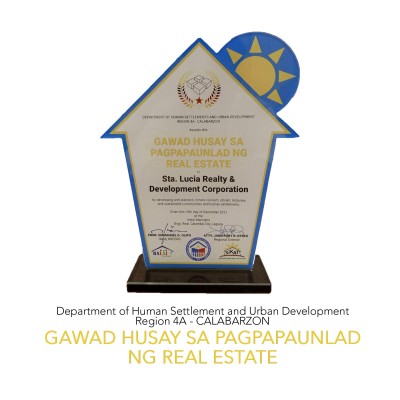 “This is another milestone for us. We thank the DHSUD for recognizing our efforts to make a difference in the life of many Filipinos. Awards and accolades such as this one inspire us to do even better. Trust that we will continue to build and develop communities that would allow individuals to thrive and live the life they’ve always dreamed of,” said Sta. Lucia Land (the publicly listed company of the Sta. Lucia Group) President Exequiel Robles.

Highly regarded for creating quality homes and thriving communities, the Sta. Lucia Group has long been regarded as a staunch ally of many hardworking Filipinos wanting to realize their dreams of owning quality homes. Its value-for-money developments have also been helping pump prime the economy over the past decades.

To date, the Sta. Lucia Group has already completed more than 250 projects across the country, providing Filipinos with an expanded portfolio of offerings—ranging from lots, house-and-lot units, farm lots, resort-themed homes, golf and lakeside communities—all of which have been made to fit the evolving lifestyles of Filipinos.

Even in the new normal, the company has managed to quickly innovate and adapt to serve the changing preferences of the market. It’s thus unsurprising that the Sta. Lucia Group continues to be a choice developer of many today.

“We are very grateful for this recognition and trust that we will continue to serve the evolving needs of Filipino homebuyers. We will not stop until every hardworking individual is able to gain access to a home they truly deserve. The company continues to expand in new locations as we aim to be in more areas across the country where we can make a significant difference,” Robles explained.

“Our homebuyers deserve only the best and this is what we will give them. With the Sta. Lucia Group as their partner, they can be assured of a happy, meaningful life with their families. So much more can still be done and we promise to continuously innovate and listen to what the market wants to ensure that what we offer is something that’s suited for them,” he concluded.