Condo renovation: From dark and cluttered to minimalist and modern 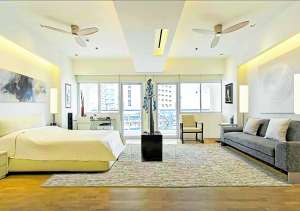 Sleek lines, monochromatic scheme, orderliness and simplicity are synonymous with minimalism. Although the minimalist interior is soothing and understated in elegance, getting this look is challenging particularly in creating a space that would feel lived-in and inviting.

Interior designer Tina Periquet achieved this look in the renovation of an old condominium in Salcedo Village, Makati, into a contemporary bachelor’s pad. She tweaked the architectural features according to space functionality and used a monochromatic palette.

The client, a financial analyst, invested in a 56-square meter space—a generous cut for a one-bedroom unit by today’s standards. Built in the 1980s, the residence had late 20th-century details such as warm colors, inset cabinets and narra parquet flooring.

Periquet explains that the condo was originally partitioned lengthwise—the bedroom and en-suite bathroom on one side and a main area with a kitchen.

Upon entrance, the guest was greeted with a kitchen in an odd-angled corner, built with country-style cabinet. That wasn’t something that would suit the young owner’s personality.

The floors were covered with narra parquet, the standard flooring in many condos back then. The bathroom was lined with ceramic tile squares while a vinyl shower curtain hovered over the bathtub.

“The bedroom partition wall was painted with a very strong brick red on both sides, which blended with the strident reddish tone of the narra floor. This created a cavelike effect that made the narrow rooms feel claustrophobic,” adds the designer.

Typical of the late 20th century, the stippled ceiling, popularly known as a “popcorn ceiling,” was covered with a variety of paint-on effects. Its disadvantage was that dirt would lodge in the cracks, resulting in a caked or grubby look.

“[The look] has fallen out of favor, particularly now that our work-tired eyes long for clean white expanses overhead,” says Periquet.

Working within the client’s modest budget, she managed to produce a 21st-century feel with minimal interventions on the ceiling, partitions, air conditioning and electrical circuit. The narra parquet was bleached instead of ripped out to neutralize the busy patterns of the mismatched grains.

“Mere interior decoration, while less costly, will do little to improve the value of a unit,” maintains Periquet. “A few grand gestures to transform the space would do far more than any amount of wallpaper, customized cabinetry or motorized features.”

Upon undertaking the renovation, Periquet formulated the vision: A living space for a single occupant, with an ample receiving area, a work zone and a private but flexible area.

She explains that the conventional layout of an open space for the living and dining areas and kitchen resulted in a narrow main room and bedroom. The new space plan turned the front area into a multipurpose space with a kitchen while the main area was comprised of the bedroom and a living area that could be divided by sliding panels.

“Why chop up the limited space into a separate bedroom and living room with only one occupant? Our solution was to remove the bedroom partition, creating an enormous main space, with a full wall of windows exposing the entire length of balcony,” says Periquet.

Casual or business visitors could then be accommodated at the front area, with the dining table doubling as a meeting table.

“Friends could enter into the lounge area, where a view of the bed was partially screened by a low TV unit with a divider panel. The panels were fitted with frosted glass to allow light to penetrate into the front area even when fully screened. The kitchen and bathroom open to the front area allowing full accessibility, and leaving the entire main area free of utilities,” she explains.

Periquet explored other possibilities in maximizing the space. She removed the old ceiling boards that made the bedroom taller by two feet. While the beams, pipes and ducts were integrated into the new design, lights were tucked into coves to highlight the edges of the ceiling planes.

With the condo management’s permission, she even modified the wall of the balcony by bringing some windows down and turning them into glass doors. This allowed more natural light to flow.

Aside from choosing a predominantly white color scheme, Periquet conveyed minimalism through the emphasis of forms, what she calls geometric abstraction.

“I conceived the space where everything was seen as geometric forms. A door is not a door but a rectangular plane that pivots, a ceiling is seen as a horizontal rectangle,” she says. The cabinets in the dining area are likewise lined like one rectangular box.

“All storage and functional elements were integrated into the wall contours. The finishes closely matched the wall paint as possible, giving the sense that the white walls were thick and had been carved out to accommodate counters, closets and display shelves,” adds Periquet.

The odd-angled ceiling was reconfigured as its pipe was relocated. The bathroom was visually enlarged by large-format porcelain tiles that replaced the small ceramic ones, and large wall mirrors. She specified low-iron, copper-free and distortion-free mirrors that don’t corrode over time. A spacious walk-in shower supplanted the old bathtub.

Periquet credits the contractor, Magis Corp., for the streamlined cabinetry. The flooring was bleached into a sea of sandy tones. Before the renovation, the kitchen was littered with objects that filled the floor.

“It intruded into the space when you entered. We wanted the kitchen to blend with the white shell. The first thing was to hone the ceiling, kitchen cabinet fronts and counter with the wall,” she says.

Cabinet under-lighting was not only an economical way to illuminate the space but it also created an ambience.

“The kitchen surfaces are glossy so that when the light bounces on them, it gets reflected,” she adds.

Before the pandemic, it became a party place because the flexible spaces allowed as many as 20 visitors. The bachelor is happy that the cost-effective renovation increased the unit’s value. While he’s currently working abroad, a tenant is enjoying the space. —CONTRIBUTED INQ