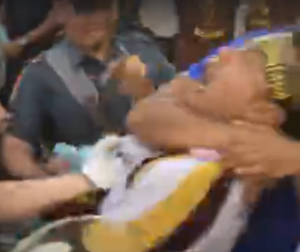 MANILA, Philippines --- The chief of the Southern Police District (SPD) apologized on Friday for confiscating the cellphone of GMA reporter Jun Veneracion as he was documenting a commotion between police officers and a devotee of the Black Nazarene during the Traslacion on Thursday.

"I would like to apologize for what happened at the Ayala Bridge during the procession of the Black Nazarene where I confiscated the cellphone of a media personality who was later identified as Mr. Jun Veneracion of GMA News thinking he was someone who possessed threat during the procession," Brig. Gen. Nolasco Bathan said in a press briefing.

He insisted that the incident was "somehow a misunderstanding."

"It all happened unintentionally. We are just securing peace and order in the area... Unang-una hindi ko kilala, siguro dahil na rin sa kapaguran," he said.

Bathan also denied ordering someone to delete the video of the commotion involving a devotee captured in Veneracion's phone.

But Veneracion, in his Facebook post, insisted his video of the commotion had been deleted, but he was able to restore it, including the part which captured the voice of a man ordering someone to delete the video.

In the meantime, Sinas said the SPD director will retain his post while the investigation is ongoing since his actions were only "part of his performance or function."

According to Bathan, the man being subdued by policemen in the area was the leader of agitators in the procession.

"Then here comes another guy na bigla kaming hinawi from nowhere, nagcecellphone, so ang naisip ko baka pakiramdam ko nga, kala ko parang granada. Kahit nga granada 'yun, for safety, aagawin ko pa rin 'yun to save lives (Then here comes another guy who suddenly shoved us out of nowhere, he was using a cellphone, so I thought, I felt, I thought it was like a grenade. Even if it was a grenade, for safety, I will still seize that to save lives)," he said.

A reporter then clarified if he thought the cellphone being held by Veneracion was a grenade, to which Bathan replied: "No. [I am saying] just in case na kahit granada 'yun (that it was a grenade), iga-grab ko pa rin (I will still grab it) because at that moment I did not know that he is Jun Veneracion. Ang alam ko (What I know is) he poses a threat to the activity."