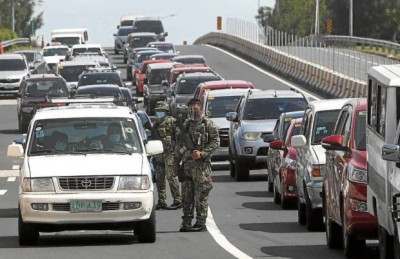 Checkpoints were activated at 12 a.m. on Sunday at the borders of the National Capital Region (NCR) and the neighboring provinces of Bulacan, Rizal, Laguna and Cavite—collectively called the NCR Plus—to stop the exodus of people in the capital region to other nearby provinces, Interior Secretary Eduardo Año said.

A new lockdown or enhanced community quarantine (ECQ) will take effect in NCR on Aug. 6 until Aug. 20. The OCTA Research Group had been urging this restriction to help contain the spread of the more transmissible Delta variant of the novel coronavirus.

Meanwhile, Marikina Rep. Stella Quimbo called for the establishment of business and transportation “bubbles” to keep the economy running, as she warned that the country could lose as much as P18 billion a day because of the lockdown.

Año said in a statement that the checkpoints, or quarantine control points (QCPs), were set up at the borders of Bulacan with Pampanga and Nueva Ecija, Rizal with Quezon, Laguna with Batangas and Quezon, and Cavite with Batangas.

“At the moment, the QCPs are at the borders of Bulacan, Rizal, Laguna and Cavite with adjoining provinces, but once we move to ECQ starting Aug. 6, checkpoints will be located inside Metro Manila,” he said.

In a radio interview, Año noted that people in NCR will likely take advantage of the period before the lockdown, which takes effect on Aug. 6, to move out of that area.

“If we don’t do this, people will leave the NCR, even those with the Delta variant who will go to different places and spread it,” he told dzBB.

“First we have to shut down the mobility of people to break the chain of transmission. So the virus would die naturally wherever it is incubating,” Año said.

“No country in the Southeast Asian region has stopped the Delta variant without resorting to a hard lockdown on major cities. Delta variant is really scary,” he added.

But Año said persons who need to travel may present at the QCPs identification cards issued last year by the Inter-Agency Task Force for the Management of Emerging Infectious Diseases or any valid ID or document proving that their travel is essential.

Public transportationIn an interview also with dzBB on Sunday, National Task Force Against COVID-19 spokesperson Restituto Padilla Jr. said public transportation will be allowed during ECQ to complement the government’s vaccination drive, but will be limited for that purpose and other essential needs.

The government aims to ramp up vaccination during the lockdown.

PNP chief Gen. Guillermo Eleazar said he had placed a medical reserve force “on standby in case they will be tapped in the vaccination process during the two-week ECQ.”

The Lawyers for Commuters Safety and Protection, a group of commuter advocates, said public transportation was still vital during the lockdown.

“Land public transport is very needed for the mobility of Filipinos who are permitted to go out [under ECQ], especially for doctors going to hospitals, those buying essential goods or are in emergency situations,” the group said in its statement.

“Total suspension of public transport is not needed. Public transport must be allowed depending on the reduced capacity and health protocols agreed upon by national government agencies,” it added.

Quimbo proposed that the government allow “business bubbles” to operate even under ECQ now that millions of Filipinos have been fully vaccinated and testing has become routinary in many places.

“By creating these bubbles to promote micro-herd immunity and safe spaces, it is entirely possible that we will not incur the same devastating economic losses we suffered during the previous ECQs,” she said in her statement.

“Through being vaccinated and implementing these business bubbles, people will then have increased mobility,” she added.

An economist, Quimbo said the ECQ this month could lead to a loss of P18 billion a day using national income data—higher than the P12.9 billion a day during the ECQ enforced in March amid a new surge in COVID-19 cases at that time, she said.

“As we have repeatedly argued before, health and economic concerns are not mutually exclusive. We can work for the recovery of both fronts simultaneously,” Quimbo said.

She renewed her call for the Duterte administration to pass the Bayanihan 3 stimulus package to fast-track the procurement and rollout of vaccines.

In his statement, Bayan Muna Rep. Carlos Isagani Zarate said Bayanihan 3 “should not be included in the 2022 budget proposal because our affected people need the ‘ayuda’ (aid) now.”

He said funds could be tapped from a variety of sources, including the government’s savings and the allotments for intelligence. —REPORTS FROM JEANNETTE I. ANDRADE, NESTOR A. CORRALES, MEG ADONIS AND JANE BAUTISTA INQ