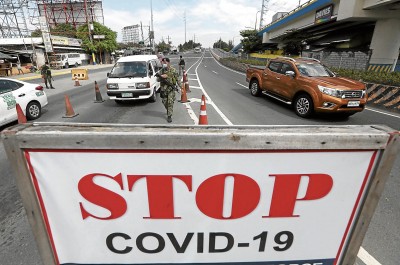 The government has rejected calls to impose a two-week lockdown to prevent the spread of the more virulent Delta variant of COVID-19, putting instead Metro Manila and nearby provinces only under heightened restrictions.

The independent OCTA Research group and the business community had earlier suggested a hard lockdown to curb early on the imminent virus spread. They warned that waiting for the Delta variant to spread before addressing the problem could lead to a longer lockdown later.

However, President Duterte on Wednesday approved the recommendation of the government’s Inter-Agency Task Force for the Management of Emerging Infectious Diseases (IATF) to place the National Capital Region (NCR), Laguna, Cavite, Rizal and Bulacan under general community quarantine (GCQ) with heightened restrictions from Aug. 1 to Aug. 15.

At his press briefing on Thursday, presidential spokesperson Harry Roque said Mr. Duterte also approved a financial aid of P1,000 per person with a maximum of P4,000 per family for affected residents in the areas placed under ECQ.

Roque said the money would come from the Department of Social Welfare and Development’s Assistance to Individuals in Crisis Situation program.

For areas under GCQ with heightened restrictions, Roque said indoor sports courts and venues, such as gyms, together with indoor tourist attractions and venues for meetings, conferences and exhibitions would be closed.

The venue capacity for religious activities, including wakes, weddings and baptisms, was also reduced to 10 percent from 30 percent.

Venue capacity for personal care services, such as salons, parlors and beauty clinics, was reduced to 30 percent from 50 percent.

Roque said “staycation” hotels were still allowed to open at 100-percent capacity but only if they have certificates of authority to operate from the Department of Tourism (DOT).

All other DOT-accredited establishments could continue to operate with 30-percent capacity subject to oversight by the local government unit (LGU).

Roque said interzonal travel from NCR Plus areas would be allowed subject to restrictions by the LGU in the destination. P2P (point-to-point) travel was also allowed without age restrictions but with testing-before-travel requirement.

Only people age 18 to 65 could go out of their homes. However, fully vaccinated senior citizens could go out subject to the presentation of government-issued vaccination cards.

In rejecting a lockdown, Roque said government experts consulted by the IATF reasoned that despite the rising cases in Metro Manila, the two-week growth rate and daily attack rate of COVID-19 as well as the health-care utilization rate remained low.

A resource person in Roque’s briefing, Dr. Althea de Guzman, chief of the Epidemiology Bureau of the Department of Health (DOH), said the latest biosurveillance data also showed that most of the sampled cases throughout the country were positive for the Beta and Alpha variants.

She said the number of confirmed Delta variant cases stood at 119. A total of 98 have already recovered and five have died. Ongoing verification also showed that at least 29 of those who got sick were not vaccinated.

De Guzman explained that in recommending the escalation of community quarantine levels, the DOH did not consider only the rising number of cases or the rate of increase.

She said the case figures were balanced with the capacity of the health-care system to accommodate the increase in infections.

De Guzman said that based on the metrics used by the DOH, “there is no definitive measurement and conclusion which we can [cite to] say that there is a surge.”

Health Undersecretary Maria Rosario Vergeire added that the government was not hiding the fact that cases were indeed increasing, “but we do not want to term this as a surge [because] we do not want to alarm people.”

“The important thing we have to do is to contain [the spread of COVID-19]. The Delta variant has entered our country. We have seen it in different communities,” Vergeire said.

Presidential adviser for entrepreneurship Joey Concepcion reiterated his appeal for a hard lockdown, saying the government needed to slow the spread of the Delta variant, or face the risk of the virus reaching the unvaccinated first before the lifesaving jabs do.

While the government kept the GCQ in Metro Manila, Concepcion said he believed the IATF would change its decision soon.

However, the Philippine Chamber of Commerce and Industry (PCCI) said in a statement on Wednesday night that it did not support another lockdown, hours after PCCI president emeritus George Barcelon backed it as long as companies were given time to prepare.

“One of our leaders was misquoted and was explaining that we need to wait and see if the health-care sector can cope with the recent surge of cases and not be overwhelmed if the rise in cases continue,” PCCI acting president Edgardo Lacson said in a statement.

Trade Secretary Ramon Lopez also opposed a lockdown unless it was indeed necessary. —With a report from Roy Stephen C. Canivel INQ