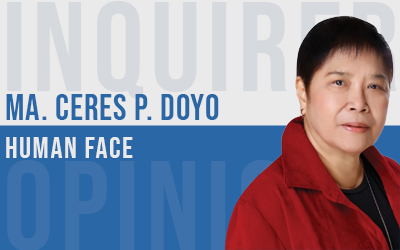 The only thing necessary for evil to thrive is for good men to do nothing”—words from Irish statesman Edmund Burke that have become a universal reminder for those who, for reasons or no reasons of their own, step back in the face of evil.

To do nothing is to enable evildoers to triumph. Enabling is a neutral word that acquires a negative meaning when used in certain contexts. It had been called in The New York Times “a political disease.”

The word enablers is often heard these preelection campaign period to aptly refer to persons and institutions that have allowed wrongdoings to thrive, tolerated evildoers to continue their misdeeds, and encouraged criminal behavior—but have remained unrepentant and therefore are undesirables. How? By their silence, acquiescence, and indifference, by looking the other way, by directly abetting or even laughing at what may be considered gross and execrable as if to say, “More!” Or by their shameless open support for the bad and the ugly.

After asking around for the Filipino translation of the word enabler and finding none to my satisfaction, I thought of settling for taga-enable and laughed at myself. I googled and found something close—nagpapagana. The root word gana should not be mistaken as appetite, and nagpapagana arousing the appetite. Gumagana could refer to a machine in good working condition and nagpapagana making it so.

Some friends I asked came up with kunsintidor (from the Spanish consentir), which means allowing something unpleasant or unacceptable to go unchecked. The Filipino noun kunsintidor that we often use seems close enough to enabler, but it still sounds tacit and passive to me.

Enable/enabler sounds strong as the opposite of disable/disabler. Legislators speak about enabling laws that would make something take effect or work. But in psychology and counseling, the word is often used in the context of addiction and other behavioral issues. When you keep giving money to drug addicts or gamblers, you are enabling them to continue being addicts and gamblers. When you keep doling out goods despite opportunities for needy persons to earn a living, you are enabling dependency. When we look the other way while corruption is going on in broad daylight, we are enablers of the corrupt.

But we can also be enablers for the good, and take enablement to the higher level that is empowerment. That is in the realm of human development.

But in today’s political context, the word enabler has a dissonant ring to it, a bad word we can pin on candidates who project themselves as stain-free when they might have blood in their hands, candidates whose middle names are synonymous with corruption, plunder, murder, human rights violations, lying, drug trafficking, land grabbing, and oppression of the poor and powerless. They have become like those they had enabled. And so these enablers should be disabled through the ballot.

German Lutheran pastor Martin Niemöller’s words have been etched in stone in hallowed places to remind us not to be enablers of human beings who are the personification of evil and who remain incorrigible. Niemöller was himself thrown into prison when Hitler ruled Nazi Germany and sent millions of Jews to die in the gas chambers and concentration camps. And so, lest we forget:

Consider the lineup of presidential candidates and those who will run for other posts. Who among them were/are enablers of undesirable characters who gained power? Who kept silent or gave tacit consent to crimes that cry out to the heavens for retribution? By their enabling acts, you shall know them.

Enablers of the despicable kind—may their tribe decrease and be decimated.