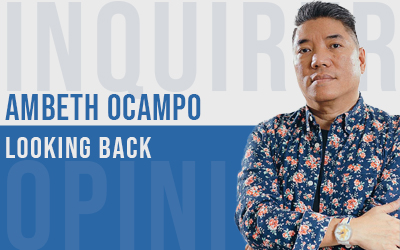 Politicians live in glass houses. When one of them starts to throw stones, as the President has been doing to distract the public from the current Senate blue ribbon committee investigation into the acquisition of overpriced medical supplies and equipment, the public is in for some entertainment. If the President did have the goods on his opponents, dishing out some blind items would be more effective than the rambling rants and curses that we have grown tired of after five years. Anyone holding dirt on politicians now is saving it for next year’s elections when the true value of scandal will be at its peak.

The present political sideshow reminded me of many lurid stories from the past that continue to haunt today’s politicians. All the leads are provided in Alfred W. McCoy’s “Policing America’s Empire: The United States, the Philippines, and the Rise of the Surveillance State” (2009). Going by the index alone, Panfilo Lacson, who has thrown his hat in the ring as contender for the presidency in 2022 has more citations than Corazon Aquino, Fidel Ramos, Joseph Estrada, and Gloria Macapagal Arroyo. McCoy should make us rethink the way the 20th century has been presented in classroom history. Take for example the Conley Case, that led to a showdown between Leonard Wood and Manuel Luis Quezon. Conley was a policeman whose campaign against vice was bad for most but good for the few gambling operators he favored. Quezon and the Filipinos wanted him fired, Wood refused. Conley was accused of corruption, but pinned in court on concubinage. He retired and returned to the US with a clean slate and pension. Conley was merely a sidelight in the bigger picture of Leonard Wood, a Republican governor general (1921-1927), trying to arrest the progress of Filipinization initiated by the outgoing Democratic governor Francis Burton Harrison and enjoyed by Quezon. Wood also followed the leads of Harrison’s indiscretions and womanizing, keeping documentation for future use.

When William Cameron Forbes and Wood arrived in Manila on a fact-finding mission in 1921 they came prepared, fully briefed with intelligence information gathered by the Philippine Constabulary a decade before. Armed with the dirt and scandal on prominent Filipinos one could literally say that knowledge was power indeed. What they did not realize was that Quezon was also adept at the game.

When Quezon and Forbes met in July 1921, the former governor-general was disarmed by Quezon paying him a long overdue debt of P3.050 before dropping snippets of information against his enemies. Quezon quoted an American justice saying: “I am not a clean man myself, but I want the judges of the Supreme Court to be clean men.” Forbes’ diaries must make for engaging reading and I now regret not dipping into them decades ago when I had the chance. Quezon caused Forbes to unfriend, as we would say today, Jaime C. de Veyra, Philippine resident commissioner in Washington by producing a copy of De Veyra’s cable that said: “I have done everything possible to eliminate Forbes…” At that point, Forbes remembered regretfully that he had lent Mrs. Sofia de Veyra a thousand dollars to keep her father’s home from foreclosure.

When governor Wood assumed office and started to clean house, he found a big mess in the Philippine National Bank. According to McCoy, Quezon got Ramon J. Fernandez appointed to the PNB Board in 1916. In 1919, bank directors Fernandez and Vicente Madrigal “voted themselves interest-free personal loans for an ill-fated attempt to corner Manila’s hemp supply. The market collapsed, leaving the bank with fifty-three thousand worthless bales of hemp and P2.2 million in bad loans that the PNB directors illegally wiped from the books. In 1920 Quezon cashed in this political debt by calling on Fernandez to finance his party’s newspaper, the Philippine Herald, and serve a term as mayor of Manila … [by] 1920, the bank had suffered losses of P75 million, the equivalent of a year of Philippine tax revenues, and the country was close to fiscal collapse.”

How come I didn’t learn this and much more in school? A new Philippine history based on new material from academic journals and primary source documents will paint personalities now memorialized in monuments, streets, and schoolhouses in different shades and colors.