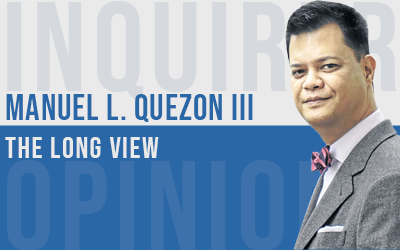 Three months ago, I mentioned in this space the emerging Great Fear among the President’s people about their future. This was, mind you, when he was still riding high; there seemed little sign he was turning into a lame duck: In fact, he was busily engaged in expelling potential rivals from his party. Ensuring no unfriendly forces took over the Palace in 2022, also served, to my mind, as a powerful incentive for the President’s coalition to stick together and work together.

A couple of weeks after that, I brought up what seemed to be the difficulty the Marcoses had, in being considered the frontrunners as far as the ruling coalition’s candidate for 2022 is concerned. Going into 2022, it seems elementary to assume that a priority, for the ruling coalition, is to go into battle by avoiding the mistake of the ruling coalition of 2010-2016 that broke into two parts going into the election. So it was that three months ago, it seemed the primary mission of Gloria Macapagal Arroyo was to find a way to broker a face-saving stand down for Ferdinand Jr. with every sign of at least one Duterte running for national office in 2022.

It used to be said of former president Arroyo, that she preferred to have separate teams scenario-out options for her in handling a crisis. Not only would this minimize surprises, it would allow her to switch to a fully-studied item if the one she was currently on proved a dud. If the current President’s people, many of who are the former president’s people, picked up a thing or two from their former chief, then it would also be logical for the President to have identified different tracks to pursue. And they’ve said as much. There’s the “Daughterte” track; there is the Duterte for vice president track; there is the Daughterte-Duterte track, each of them running with a weak running mate. This last option, however, leaves no room for a Marcos and perhaps it’s an indication of that plan being at its height, that former president Arroyo and others, including Sen. Imee Marcos, seem to have been maneuvering to very publicly explore a no-BBM 2022 scenario.

There’s been intense speculation since 2016 on how close, exactly, the President and the Marcoses are. The general trend suggested they weren’t as close as might otherwise be assumed; I’ve suggested from time to time that the President seems to have considered his political debts to them paid by his decision to permit the former president’s burial in the Libingan ng mga Bayani. He, however, preferred a predictable—because easy to contain—opposition vice president to Marcos Jr. winning his protest; the looming atmosphere of a Marcos Restoration by means of an unstoppable victory, thus came to an end with a series of legal whimpers.

The Reader’s Digest version of this is the President zeroed in on Imee Marcos, stating he really didn’t have a connection to the Marcoses, that they really didn’t feature in his campaign, but that he did—grudgingly, because he found it distasteful, do them a favor; when Imee effusively thanked him, the President says he replied he was merely doing his job. With the ratings of the President’s recorded rants sinking like a stone, it may be the Marcoses have astutely figured out the President now needs them, more than they need him—and the President’s lashing out at them as a result.