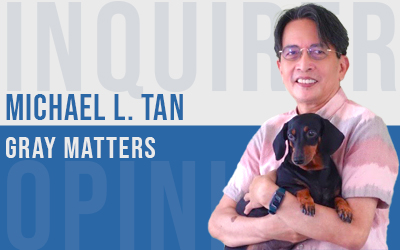 In our COVID times, the cellphone has become a dreaded bearer of bad news.

Just the past week I got announcements of three deaths from among friends, all fairly young. One of them was the mother of two very young sons.

News about COVID infections streams in even more frequently and in this last week, my two family drivers (one in Laguna with some of the kids, and one in Manila) tested positive within days of each other.

But I’m feeling thankful that in both cases, the infections were identified early so the drivers went into quarantine immediately and there were no infections with their families and in my household. That included me testing negative.

Let me give you a bit more of details to emphasize what was so crucial in allowing the early detection and controlling the spread.

A few weeks back an elderly friend, fully vaccinated as I am, told me that she was using rapid testing kits for the COVID-19 antigen called lateral flow tests (LFTs) which she used for her driver and household helper. Both lived with her but who would go home every weekend to a nearby province.

I was aware of our vulnerability as senior citizens, even with full vaccination, especially because I lost a cousin, also fully vaccinated, in July. In spite of the government’s sequestration of elders and minors, the possibilities for infections are very real from visitors and employees moving in and out of the house, especially with Delta variants being so much more contagious.

So I took my friend’s advice and ordered the LFTs for myself in Manila and for my children as well in Laguna.

There are two types of these COVID LFTs, one testing saliva and the other nose and throat swabs. I checked the medical journals and saliva testing seems to be more accurate. You extract the sample (spit or swab), mix with a reagent or chemical, drop the sample-plus-reagent into a small cartridge and watch it flow across into a membrane. One line appears as control within a minute or so and stays that way even after 15 minutes if you don’t have the antigen. If you are infected, another line appears. Just like the pregnancy testing kits, with about the same level of tension and, certainly, no joy with a positive result. Everything’s completed within half an hour.

A PCR antigen test, on the other hand, can take at least a day, even several days, for results. It’s more accurate but much more expensive, from P2,000 to P5,000. The LFTs cost from P250 to P600 each; do compare prices on Lazada! The LFTs are very specific, meaning they’re highly unlikely to give false positives. False negatives do happen more frequently.

Note that the LFTs detect antigens, meaning parts of the COVID virus itself. This is different from earlier antibody testing kits, which do not detect the virus but the antibodies produced in reaction to the infection. These are not as accurate because there can be a delay in the production of antibodies. Antigens, on the other hand, can be detected early, even before symptoms appear.

These kits are life-saving, if used properly. Do read the instructions carefully but be aware, too, there’s more to this than testing technique. It’s also knowing when to use it. I had a friend telling me he remembered being exposed about two weeks ago and wanted to be tested. I said if he still hadn’t developed symptoms the test was just going to be a waste of money ... unless he had been exposed again.

What’s most important is for people to want to get the test as soon as they feel they’ve been exposed (usually, more than 15 minutes to someone without a mask or to a crowd) and/or they feel symptoms. In the case of my Laguna driver, he tested as soon as he felt feverish and had an itchy throat, and remembered being in a market with some unmasked people. The other driver, who drives for me, believes COVID is a government “gawa-gawa” (hoax) and first resisted being tested insisting he was all right, and continued to be in denial after he tested positive ... twice.

Other governments are now promoting self-testing with the LFTs for homes, offices, and schools. Educate yourself—check nhs.uk for the British government advisories, or if you want a technical article check out “COVID-19: Rapid antigen detection for SARS-CoV-2 by lateral flow assay,” a fairly recent overview of the tests published on The Lancet website last May.