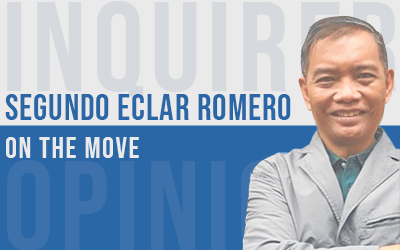 One anecdote I remember about Gibo Teodoro was how puzzled he was when, chairing a performance review meeting as secretary of national defense around 2008, some Department of National Defense (DND) offices were reporting failure to achieve their targets. He was reported to have said, “I cannot understand how offices report failure to achieve their targets, but the evaluation of every officer and employee in these offices are all uniformly ‘very satisfactory.’”

A private sector orientation seemed to set Teodoro apart from government managers long inured to the peculiar Philippine bureaucratic culture. Government offices are perennially “overstaffed but undermanned,” confused by three strategic plans—the unimplemented past, the incompletely formulated present, and the anticipated strategic plan of the incoming administration. As to personal satisfaction ratings, they are intended to ensure that employees keep their jobs, not to achieve their performance targets.

When Teodoro declined to be drafted as defense secretary of president-elect Rodrigo Duterte in 2016, he did not even have to explain. People seemed to understand. But that Gibo Teodoro, 57 by June 14 next week, has awakened and actively seeks to be Sara Duterte’s vice president raises eyebrows. When he declined Duterte’s offer of the DND top post in 2016, there was at least a suspension of disbelief at the time that Duterte would indeed turn the Philippines around in 3-6 months. But in 2021, five years after, surely Teodoro sees for himself the evidence of how the Philippine economic, health, and political landscape has been wasted. Why join the Duterte camp now? It is as if a seasoned general who saw through Hitler’s madness in the early days has now decided to join the Führer’s war effort in the closing days of the Third Reich.

Teodoro said it’s his wife, Nikki, also a politician, who has made him throw his hat into the ring. He recalled making calls to friends to consult about a possible political comeback, perhaps tickled that his name figures frequently in political discourse. Former Rep. Rolando Andaya, Jr., who received such a call from Teodoro, promptly turned into a political matchmaker, bringing the Teodoro couple to Sara Duterte in Davao City for an hour-and-a-half interview. Teodoro came away from the meeting totally convinced that Sara Duterte should run for President. He is now a “true believer,” showing a level of unshakeable loyalty to Sara Duterte.

Teodoro and Sara do not have a history of previous friendship or of having worked together. The matter of Teodoro’s vaccination in Davao adds to the mystery, as it didn’t even have to be on the agenda. It smacks of a random ritual of obeisance or an early test of public reaction to an arguably irregular act.

A Sara Duterte-Gibo Teodoro tandem sidesteps the likely constitutional challenges that a Sara Duterte-Rodrigo Duterte tandem will attract. It also gives the Duterte administration a façade of “normality” to attract uncommitted voters and swell the DDS ranks. But such a normal, issue-based campaign instead of an emotional campaign can also work against the Duterte camp.

Teodoro tells us he has decided to come out after 10 years of shunning the political limelight because of the COVID-19 pandemic, as if he has unique special qualifications to turn around the prolonged massive suffering of the country arising from the pandemic and the shadow disaster of pandemic response mismanagement.

Once finalized, a Duterte-Teodoro tandem will push the contending presidential bids of Manny Pacquiao, Bongbong Marcos, and Isko Moreno out into the open. These bids appear to be unstoppable, for various reasons. Manny Pacquiao’s bid is supposedly a divine mission; Bongbong Marcos’ bid is to recover a lost family treasure; Isko Moreno’s bid is an expectation that an unseasonal tidal wave of popular clamor can open up for him. Rodrigo Duterte has begun to twit Pacquiao. Diehard Duterte supporters have begun to gang up on Moreno.

In this light, Vice President Leni Robredo’s decision to hold back on announcing her presidential bid now looks brilliant, giving the unbridled contending presidential ambitions in the Duterte camp time to bloom with ferocity. Every day sees new defiance of Mr. Duterte’s overbearing presence. It is not the dissension in the opposition ranks that will define the May 2022 electoral

outcome. It will be the fragmentation of the Duterte camp.