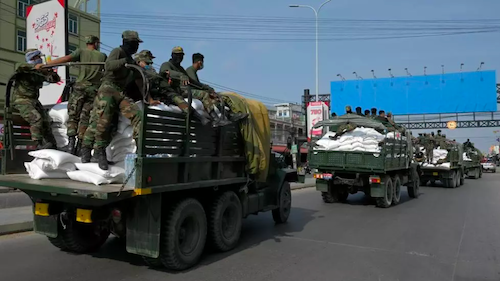 Cambodia on Tuesday ordered journalists to stop reporting from blockaded coronavirus "red zones" and from chasing ambulances as the country battles against a record surge in infections.

The country has seen Covid-19 cases surge since February, when an outbreak was first detected among its Chinese expatriate community.

On Tuesday, officials announced a record 938 new infections, bringing the total cases to 16,299 with 107 deaths.

Authorities have transformed schools and wedding party halls into covid treatment centres as hospitals are running out of beds and Prime Minister Hun Sen warned the country was "on the brink of death" from the virus outbreak.

Phnom Penh and adjacent city Ta Khmau have been under lockdown for 20 days and the government has announced the blanket would end from Thursday.

But authorities said areas with high infection rates would remain under lockdown.

Police have set up blockades around red zones barring residents from leaving their homes, except on medical reasons.

On Tuesday the information ministry ordered journalists to immediately stop reporting from the red zones, warning they would face prosecution.

The ministry said some journalists had reported from red zones and banned areas such as treatment centres and hospitals.

It also said some had "chased ambulances" and caused confusion and unrest.

The order comes as residents living in red zones complained about food shortages and took to social media to appeal for essential aid.

Rights group Amnesty International issued a strong condemnation of Cambodia's lockdown measures last week, saying they had left many people to go hungry and humanitarian groups had been barred from distributing food and other essential aid.

"Right now, residents of 'red zones' and others in Cambodia are going hungry because of fundamentally unreasonable policies."

Cambodian authorities have asked residents in the red zones to apply for food aid and said they distributed rice and canned fishes to tens of thousands of household each day.