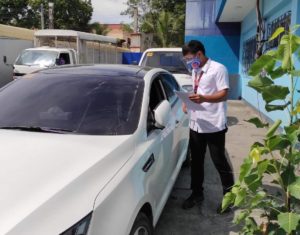 (The MVIS will no longer be mandatory. Meaning, there will be no additional fees in the registration of vehicles.)

(This was the decision of the President where he balanced the needs of the public amid the pandemic.)

The Senate committee on public services earlier recommended the temporary suspension of the operations of Private Motor Vehicle Inspection Centers (PMVICs) as more issues and questions were raised during the panel's hearing on Tuesday.

Senators have also grown "highly suspicious" of the decision of the Department of Transportation (DOTr) to privatize the vehicle inspection program, saying the move is prone to corruption.

Senator Grace Poe, who led a hearing into the implementation of the MVIS, cited figures estimated by Senate President Pro Tempore Ralph Recto that the 23 private motor vehicle inspection centers (PMVICs) currently operating stand to earn P8 billion annually, while the DOTr will only get P100,000 from each private operators annually.

PMVICs are authorized to collect an inspection fee of P1,800 from motor vehicles weighing 4,500 kilograms or less and another P900 in case it fails the first set of inspections.

Motorcycles and tricycles, on the other hand, are charged a P600-inspection fee and a P300-reinspection fee, if necessary.

If the vehicle fails the test, it will be required to undergo necessary repairs and will have to return to the private inspection centers to be inspected again before it is cleared for registration with the Land Transportation Office.