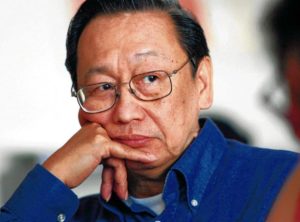 Sison, one of Duterte’s staunchest critics, slammed Duterte’s “treasonous deals” with China, which include the joint oil and gas exploration deal in the West Philippine Sea.

“The Filipino people should be alert to the high probability of Duterte betraying them by selling out their sovereign rights in exchange for the high interest loans and overpriced infrastructure agreements that make the Philippines a debt colony of China,” he said in a statement.

The communist leader, who is in exile in The Netherlands, said Duterte committed treason by making a joint oil agreement with China.

Sison was referring to the convicted inmates released under the Republic Act 10592 or the Good Conduct Time Allowance.

Presidential spokesperson Salvador Panelo, however, said Malacañang was unfazed by his latest tirades.

“The Duterte presidency is engrossed in its constitutional duty of serving and protecting the Filipino people, that it has no time to waste in responding to the latest anti-Duterte statement of Jose Maria Sison, other than saying that it is another arrant raving and incorrigible ranting coming from an aging armchair passé rebel whose illusory vision has outsprinted the ticking hands of time,” Panelo said in a statement. /je