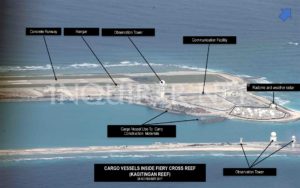 MANILA, Philippines --- In an apparent move to further tighten its grip in the South China Sea, Beijing recently announced it was establishing two districts in Paracels and Spratly Islands.

The two administrative units are under the control of Sansha City, Chinese People's Liberation Army said in its news website on Friday (April 17).

The "Nansha District" would be in charge of Spratly Islands, where the Philippine claims in the West Philippine Sea are located, as well as the surrounding areas. Its government will hold office on Yongshu Jiao, China's name for Philippine-claimed Fiery Cross (Kagitingan) Reef.

The "Xisha District" would manage Paracel Islands, the Macclesfield Bank, and other areas close to it.

Vietnam was outraged by China's latest move, and has strongly protested it.

Maritime expert Prof. Jay Batongbacal said China's creation of new districts is an attempt to demonstrate that it has absolute control of the disputed waters.

If no other state objects, it can be interpreted as consent.

"Absence of protests on the part of the other countries, especially those directly affected, will be seen and portrayed as acquiescence and acceptance or recognition of the exercise of such control as valid," he told Inquirer.net on Monday.

It will be a recognition of China's sovereignty in the area, and the validity of its claims despite their being obviously excessive, illegal and unsupported by law or facts, he said.

Retired Senior Associate Justice Antonio Carpio, who played a crucial role in securing the Philippines' historic victory against China at the Permanent Court of Arbitration, urged the Philippine government to object to China's creation of new districts.

"DFA (Department of Foreign Affairs) should protest because Fiery Cross (Kagitingan) Reef is part of our Kalayaan Island Group. Vietnam already protested. If we do not protest, China will later claimed we acquiesced," he told INQUIRER.net.

Former Foreign Affairs Secretary Albert del Rosario said this move only goes to show that "China has been relentless in exploiting the COVID-19 pandemic as it continues to pursue its illegal and expansive claims in the South China Sea to the prejudice of Filipinos, Asean states and the international community as a whole."

Like Carpio and Batongbacal, he also called on the Philippine government to protest China's recent actions, the way it recently did over the sinking of a Vietnamese fishing boat in early April.

"These recent events in the South China Sea remind us Filipinos to be eternally vigilant in the defense of our country's territory and sovereign rights even as we confront a very grave threat as COVID-19," he said in a statement.

As the coronavirus pandemic rampages across the world, China continues its expansionist activities in the South China Sea.

A military transport plane was also spotted on Kagitingan Reef in March, another indication of China's unceasing operations despite the global pandemic.

"China's not going to stop. If a global pandemic doesn't cause China to calm things down the South China Sea, There's not much that will," American maritime security expert Gregory Poling said in an online news conference last week.